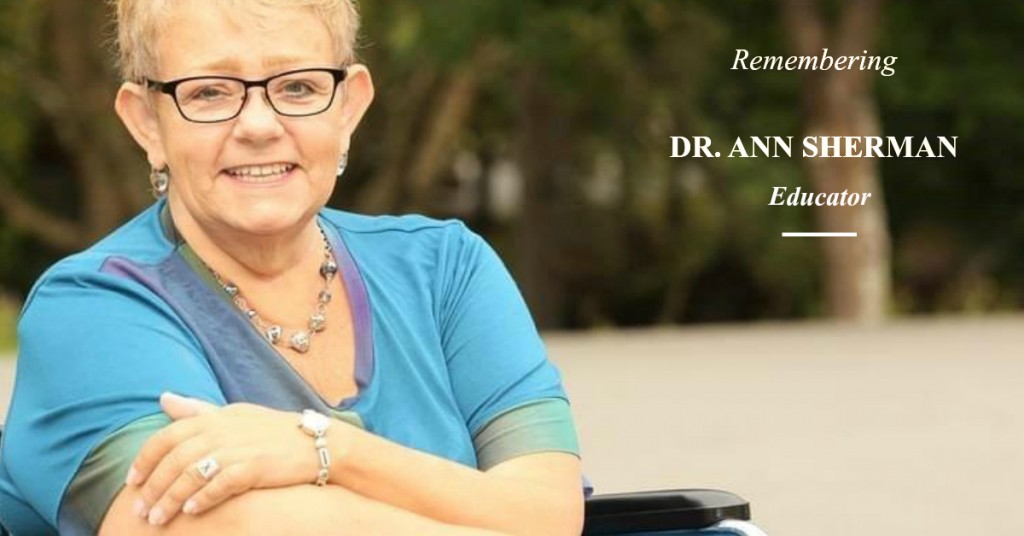 (Fredericton, August 8, 2017) – Dr. Ann Sherman was a perpetual educator, both professionally and personally, throughout her life. In 2013, she added Science East to her list of people, places and things which benefited from her support and encouragement. She was excited by our inquiry-based approach to science education, which reflected her own perspectives on effective engagement in education. Ann began her teaching career as a high school science and math teacher and moved to elementary school teaching and earned a grad degree in Leadership and then completed an M.Ed. in Curriculum and Instruction from UNB. She ended her public school teaching career as a school administrator before completing a Ph.D. at the University of Nottingham. She taught in university settings since 1996 and continued to research effective teaching, formative assessment, inquiry based science, and the connections between all three.

Ann was slated to begin her first term as Science East President this September. During her governance at Science East, she was especially proud of the success of our free-access early learning program in science and the First Nations Science Program which works with three partner schools. Her long relationship with Science East began with the CRYSTAL Atlantique project, a 5-year collaborative study, bringing together universities and other learning institutions from New Brunswick and Nova Scotia on the subject of informal science education and professional development for teachers in the K to 12 sphere.

Michael Edwards, an educator at Science East for 20 years, was introduced to Ann during their work with the CRYSTAL project, “When we met, it was her wicked sense of humor that helped us hit it off. I probably made a somewhat inappropriate joke quietly to her and she laughed long enough and loud enough that everyone was staring, wondering what was going on.” Years later at the Iron Science teaching competition in Alberta, a Canada-wide challenge encouraging innovation in science education, he again ran into Ann, then serving as the Vice Dean of Education at the University of Calgary. She was bursting to share a secret with him and requested he keep it strictly under wraps until it was officially announced to the public—she was to be the new Dean of Education at the University of New Brunswick. She was coming home.

Returning to Atlantic Canada, she was able to be closer to beloved family and friends once again and continue her mission to change the face of education across the Atlantic Region for teachers and for students. When she returned as Dean of Education at UNB, the CRYSTAL project was winding down however the two remained in touch while he completed his Masters of Education at UNB. Ann was integral in helping him complete his thesis and defend it successfully, “She was someone that others gravitated towards because she radiated a kindness where she genuinely wanted to hear about what you were doing. And then she would offer to help. She was always offering to help out because she was just that kind of person. She possessed an insight that could provide clarity when it was lacking, and a no nonsense, pragmatic approach that she kept right up to the end. Quite simply, she was an amazing influence on everyone around her, and I’m very lucky to have known her.” Even the news of her recent prognosis was received in her usual style—with spirit, adaptation and pluck.

In 2013, Science East began strategic planning for the science centre’s future. Ann was interviewed for a related study. Months later when she was asked to join the board, she simply said “What took you so long!?” She loved the intrigue of the historic jail and was excited to be a part of enhancing the educational offerings at the science centre for parents, teachers and the public in science learning with new classrooms, early learning resources and exhibition space. She was a powerful force in driving Science East forward. Earlier in the year the entire Science East boardroom was moved to the first floor of Science East’s auxiliary building to accommodate her physical challenges.  It was the second of two major moves for the board and indicative their collective desire to remove any barriers to her input and involvement.

Ann was a regular sight at the science centre, bringing classes of student teachers to Science East to get first-hand experience in using the hands-on science. She consistently encouraged students to use these methods to increase engagement and interest in their future classrooms. Her collaborative relationships in education spanned the globe and she continued to pursue these throughout her health issues of recent years. Her international work in education provided professional development for teachers in countries for whom education is a foundational piece in social and economic development. At her request, this legacy will continue this autumn when her longtime colleague Dr. Leo MacDonald (StFX), Michael Edwards and Dr. David Desjardins (Science East), and Dr. Grant Williams (STU) head to Kuwait this year. The group will undertake the monumental task of training all of the science educators in Kuwait’s schools in the use of experiential and inquiry-based teaching in science—a vital piece of the country’s broad renewal of the school system.

Dr. Linda Ann Sherman died on August 2, 2017 surrounded by family and friends.  Her official obituary and a video of her life can be found here. In lieu of flowers, she requested that donations be made to the Hospice House in Fredericton, where she spent her final days in great comfort and care.

A memorial service will be held on Friday, August 11th at 1:00pm in the Collingwood United Church, Collingwood, NS. Private condolences may be sent to the family by visiting www.mmcfunerals.com