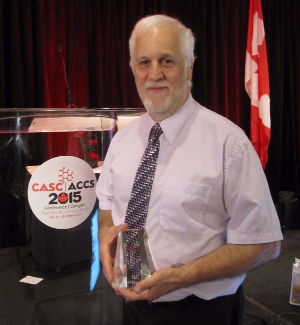 The CEO of Science East, Dr. David Desjardins is honoured to receive the Outstanding Career Achievement award from the Canadian Association of Science Centres (CASC). The presentation was made at CASC’s 2015 awards gala in Edmonton, Alberta on Saturday. The Outstanding Career Achievement award is given to an individual who has made major long-term contributions to the Canadian science centres community.

Dr. Desjardins joined Science East’s Board of Directors executive committee in 1997. He became President in 1999, before assuming the role of CEO in 2001. Under his leadership, New Brunswick’s only hands-on science centre has grown to share quality science experiences with more than 46-thousand people each year, through the Science East science centre, as well as through community and school-based outreach.

In the broader field of science learning, Dr. Desjardins has sat on review panels for the Natural Sciences and Engineering Research Council of Canada (NSERC), Canada’s federal funding agency for university-based research. He has also reviewed nominations for the Prime Minister’s Award for Teaching Excellence. Most recently, Dr. Desjardins was co-host of 2015 Canada-Wide Science Fair in Fredericton, an event he has contributed to as a judge for many years.