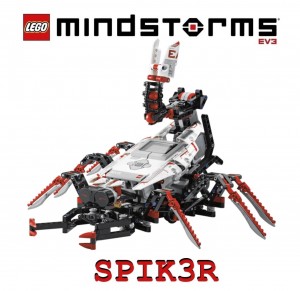 Science East’s unique Robo-Families program is back, with four new exciting projects planned for October and November. Robo-Families is the only program of its kind in New Brunswick, allowing parents and children to build, program and operate robots, using LEGO Mindstorms EV3 kits. The workshops are held on Saturday afternoons at Science East.

There’s a new twist to the popular program this year – Science East will be offering a couple of two-weekend builds, along with the usual single afternoon sessions.

“There’s so much you can do with the Mindstorms kits, but only so much you can get done in a three hour session,” says Robo-Families coordinator, Kayoe Stewart. “We thought it would be fun to expand a couple of the workshops over two weekends, to really explore all the features of the different robot builds.”

Two robots will be featured in the double sessions – the SPIK3R (Oct 17 and 24), a scorpion-like robot that can attack targets with its lightning tail and crushing claw – and the GRIPP3R (Nov 7 and 14), a cool robot that can grasp and carry heavy objects.

“You won’t have to wait until the end of the second session to have a functioning robot,” explains Stewart. “The workshops are broken into missions. The first session, you might build a simpler version of the robot and program it to accomplish different tasks. Then the second session, we’ll enhance it and add other features to make it something really special.”

Robo-Families will also offer two one-off workshops, where families will build and program a complete robot project in the three hour time period. The EV3 GAM3 is scheduled for Nov 28, and the always popular SUMO BOTS will be held on Dec 12.

“Space is limited and we expect the workshops to sell out,” says Stewart. “Be sure to register early to make sure you get your spot!”

$30 for one child and one adult (members)

$34 for one child and one adult (non-members)

$15 for one child and one adult (members)

$17 for one child and one adult (non-members)